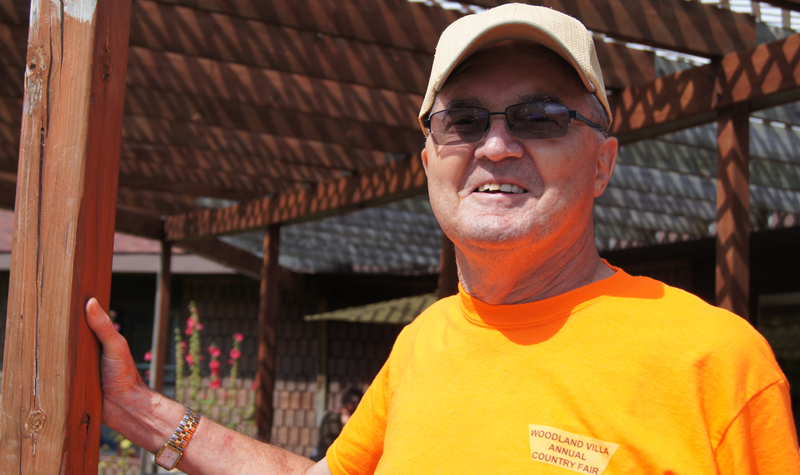 Pictured above, Woodland Villa resident Victor Dawkes received the home’s 2017 Lifetime Achievement Award for his volunteer work in the community during the past 50 years. In fact, Victor was even volunteering at the home’s Country Fair Aug. 16 when he received his award.

LONG SAULT, Ont. – Volunteering has been an important part of Victor Dawkes’ life for 50 years. In fact, when The OMNIway recently spoke with the Woodland Villa resident, he was volunteering at the Cornwall-area long-term care home’s annual Country Fair on Aug. 16.

And it’s because of Victor’s passion for helping others that he was nominated for and received Woodland Villa’s 2017 Lifetime Achievement Award.

“I was overwhelmed with the amount of volunteer experience he has; Victor has been involved with the Catholic Church, with schools and with libraries – he just loves to help out,” says administrator Janna Sabourin, who nominated Victor for the accolade.

“Since he has been a resident here, that’s what he has been doing – helping out all the other residents – and that has been really nice.”

Victor says volunteering gives people a chance to make a positive difference in other people’s lives. Knowing he can make a difference to others has been the most exciting part of volunteering for 50 years, he says.

Victor says that while he was surprised to learn he was this year’s recipient of Woodland Villa’s Lifetime Achievement Award, he is honoured to have his work recognized.

“It was a surprise, but it was a pleasure, it was the very first time I received an award, so I was very, very pleased,” he says.

Streamway Villa residents have a ‘rib-tastic’ Saturday with family and ...