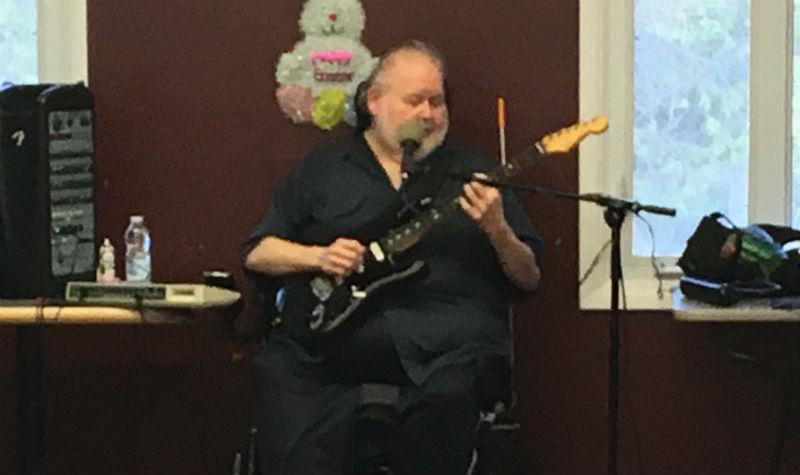 Neal Harvey, entertainer and former resident of West Lake Terrace, recently moved into his own place after receiving the care he needed at the Prince Edward County long-term care home.

Neal Harvey moves from LTC home into his own apartment

A microwave oven, a tea kettle, a slow-cooker and a coffee machine – these were the housewarming gifts West Lake Terrace offered Neal Harvey, a former resident of the Prince Edward County long-term care home, who moved into his own apartment in Bowmanville Feb. 1.

After living for two years at West Lake Terrace, Neal is back on his feet again. Neal, who’s in his sixties, is able to use a walker and his electric wheelchair if needed. When he moved into West Lake Terrace he wasn’t able to walk following a back injury.

Over the past two years, Neal has worked diligently with the home’s physiotherapist to regain his mobility.

Neal tells The OMNIway he was “flabbergasted” by the send-off presents and is impressed with the team at West Lake Terrace.

“I certainly wasn’t expecting it,” he says. “I was blown away. They go above and beyond here for everybody.”

Neal says he chose West Lake Terrace for recovery and rehabilitation because he had family in the area and his sister is also a resident at the home.

“When I came here, I could barely move my legs,” Neal recalls of his condition when he arrived. “The physio here has been big-time instrumental.”

He has mixed feelings about the move, noting the residents and staff at West Lake have become like family.

However, he’s looking forward to having his own place and “getting my life back.”

The home, like many, is short-staffed, the LEC says. But the level of care provided to Neal – which he raved about during the party – was a boost for employees and demonstrates their commitment to the home and the well-being of its residents.

“It was not only good for Neal but a benefit to all of us too, reminding us of the good things we accomplish every day at work.”

Neal, who is a singer and an engaging performer, provides birthday party entertainment at West Lake Terrace. It was during a recent party that employees stepped in to surprise him with the fond farewell.

“After he said his little speech he said ‘I’m going to start singing now before I start to cry,’” the LEC notes.

“We’re happy but we’re sad. He’s going to leave such a void in our home.”

New programs to enhance residents’ quality of life on the horizon at Wood...