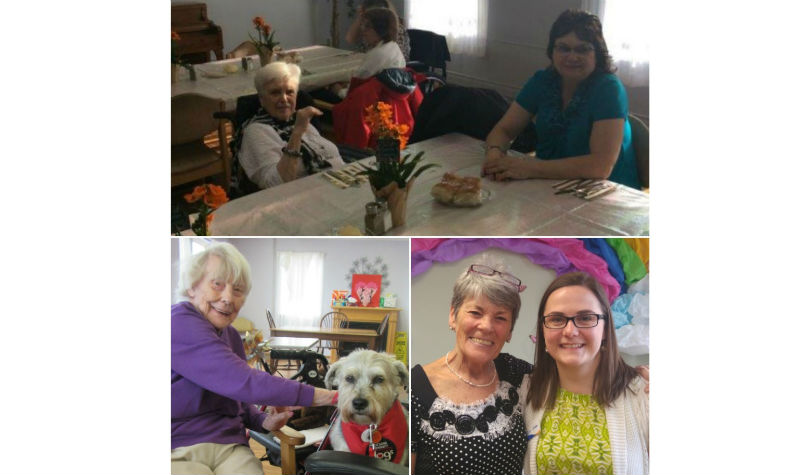 From two-legged to four, volunteers are an integral part of the culture at OMNI Health Care’s long-term care homes.

In honour of National Volunteer Week, which ran earlier in April, The OMNIway profiled people and a pup who are making a difference.

For three years, a miniature schnauzer mix named Vezna has been volunteering at Forest Hill with her owner, Sharon MacDonald.

Sharon and Vezna, who are with Ottawa Therapy Dogs, leave residents smiling after each visit.

Vezna doesn’t have to do much to get residents’ attention. Sometimes residents simply want to pet her, scratch her or get her to shake a paw.

“She is the perfect little therapy dog,” Sharon says of eight-year-old Vezna.

“Some residents with dementia can become agitated, but after a visit (with Vezna), you can see what a calming effect she has on them,” he says.

“She is one of the most laid-back dogs I have ever met. She is so calm and she’s just fantastic with the residents.”

Meanwhile at Willows Estate, a friendship circle is a popular gathering all-round for residents and the volunteer who co-ordinates the activity.

For the past eight years, a small group of residents has met twice a week with volunteer Rose Vanderhoff for companionship and conversation at the Aurora long-term care home.

“I just feel that I’m doing for others and I get satisfaction,” Rose says.

“I learn so much from (the residents). They’re fascinating and they’re interesting.”

For volunteer Helene Waddell, when her father moved into Frost Manor last summer, she immediately sensed the warmth and love that staff members at the Lindsay long-term care home have for residents.

She also felt the need to help, so Helene began visiting with other residents when she was at Frost to see her dad.

By January, life enrichment co-ordinator Lyndsay Burton asked Helene to come on “officially” as a volunteer, which she did. Lyndsay describes Helene as a “natural volunteer.”

“When she first came here, she burst in with energy and she just started helping – it was something she just didn’t think anything of,” Lyndsay says.

“When a volunteer is really excited about what they’re doing, the residents are going to get excited.”

As a volunteer, Helene helps with programming, feeding during mealtimes and does one-to-one visits with residents.

Helene was one of the volunteers Frost Manor honoured at the home’s annual volunteer luncheon on April 5. Volunteers were treated to a Mexican-themed lunch prepared by nutritional care manager Zach Jarvis and his team that included chicken chimichangas, Mexican corn and rice

Quality Forum 2019: celebrating the joy of working in long-term care