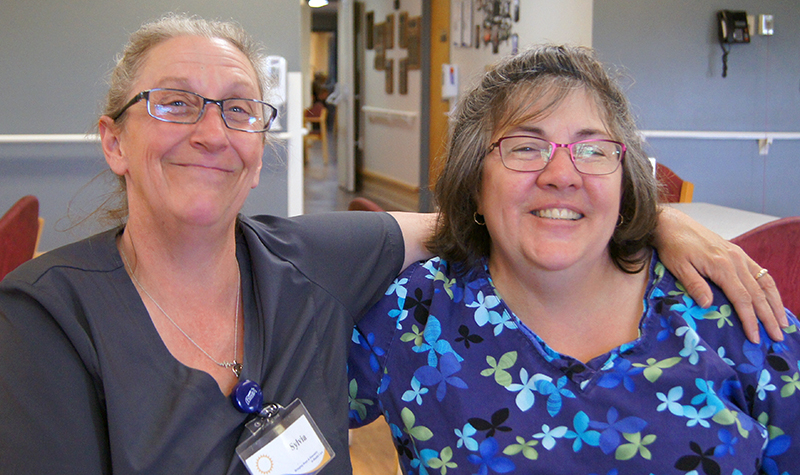 Administrator Linda Pierce, who nominated Sylvia for the honour, says ‘there were lots of good reasons that just jumped out at me and said, Sylvia O’Brien deserves this award.’

Sylvia, who has worked at Village Green for 25 years, was nominated for the award by the home’s administrator, Linda Pierce, who says Sylvia met every one of the award’s requirements, which largely focus on the positive impact PSWs make on residents’ quality of life.

Of note, Linda says Sylvia’s involvement with the Behavioural Supports Ontario (BSO) team at the Greater Napanee long-term care home was a large part of the reason she nominated her for the award.

BSO is a provincial initiative that’s enhancing the quality of life for seniors affected by dementia and other conditions that can cause agitation. The funding, which is provided to long-term care homes through the province’s 14 Local Health Integration Networks, is largely put towards staff education.

“I felt she should be honoured for that, and I really felt that she should win the award,” Linda tells The OMNIway.

“Sylvia is compassionate, she is hard-working, and after 25 years she has stayed consistent to her true being in trying to do the best for the residents, so there were lots of good reasons that just jumped out at me and said, ‘Sylvia O’Brien deserves this award.’

“We were just thrilled when she won it; we were just ecstatic,” Linda says.

Sylvia says she knew she had been chosen as a finalist for the PSW Leadership Award but was still surprised when she was called to the podium in Toronto to receive her accolade.

“It was both exciting and humbling,” she says.