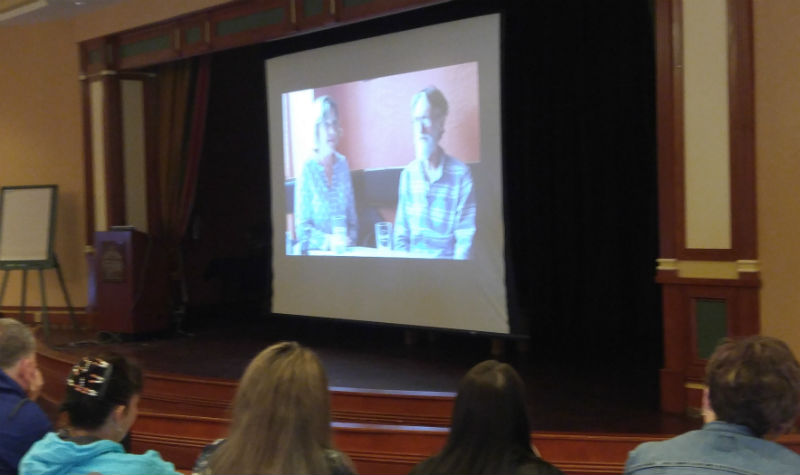 ORILLIA, Ont. – There was a new twist to this year’s OMNI Health Care Quality Forum that proved to be a great way for the organization’s long-term care homes to provide a glimpse into the lives of some of their fascinating residents.

Each home’s team members produced short videos that highlighted the lives of some of their most colourful residents – and the stories were often told by the residents themselves.

The videos were presented each day at the forum between sessions. Team members got to cast an electronic rating of each video, a job that proved to be difficult since each video was well thought out and interesting.

The voting was a close call, but in the end, the No. 1 choice was the video created by Streamway Villa team members for their feature on Terry Juric, the former bassist for Canadian hard-rock band Moxy.

As a member of Moxy, Terry played for audiences across North America, touring with the likes of AC/DC and KISS. He recalled his days in the band and shared fond memories. Forum attendees burst into laughter when Terry described some choice words he had for KISS bassist Gene Simmons when he picked up Terry’s bass guitar without permission – a no-no in the rock ’n’ roll rule book – before one concert.

Other notable videos included a submission from Riverview Manor about the life of Joan Brownson, who joined the British Army during the Second World War and became well known in Peterborough’s volunteer community after she moved in Canada in 1957. Today, Joan lives at Riverview Manor with her son, Tim.

The videos also demonstrated team members’ creativity. Wildwood Care Centre’s submission, entitled The Life of Vi, was a parody of the Academy Awards and highlighted the life of resident Vi Corbett, a member of the Royal Canadian Legion for more than 60 years and a 40-year community volunteer. Naturally, Vi received her “Oscar” at the end of the video.

A running theme at this year’s Quality Forum, which was held at Fern Resort near Orillia May 7-9, was “joy at work”. OMNI president and CEO Patrick McCarthy notes that the videos married well with this theme.

“What brings us joy at work often is the residents and the real deep sense of satisfaction you get from doing something that makes a difference, and so I think (the videos) all tied together and brought us right back to the residents and to each other,” he says.

The annual Quality Forum brings together managers from across OMNI’s 18 long-term care homes for three days of networking, learning and fun with a focus on providing quality to residents.

Streamway team member comes up with a ‘cheesy’ way to help residents enjoy...