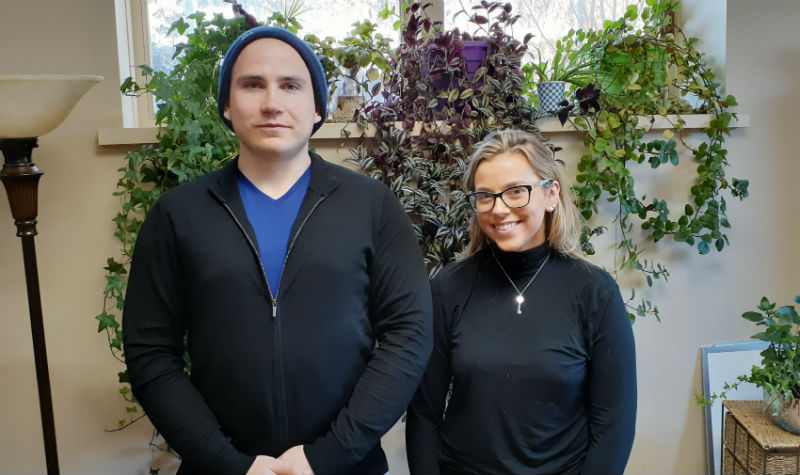 Based on one of the RNAO’s best practice guidelines, a simulation created by two nursing students underscores the importance of such relationships for Riverview Manor staff

PETERBOROUGH, Ont. – Long-term-care home residents should never be part of a “to-do list” – rather, they should be engaged and empowered to help create their own care and making their own decisions. This is the central theme behind a case study two Trent University students have brought to life through a skit they created for Riverview Manor staff members.

Alana Mahoney and Dmitri Kulikov are second-year nursing students who recently did a placement at the Peterborough long-term care home.

As part of their placement, they created two skits illustrating the benefits of two of the Registered Nurses Association of Ontario’s (RNAO’s) best practice guidelines.

The first skit, which was discussed in an earlier OMNIway story, was based on developing therapeutic relationships with residents.

The second skit was based on the importance of building empowering relationships with residents. In this living case study, the focus is on sit-down conversations between a caregiver and resident (played by Alana).

Effective examples of building empowering relationships with residents included acknowledging the resident as the expert of their own health, encouraging the resident to be active in their decision-making, and starting conversations by asking residents about the things that are most important to them.

“This was really incorporating the therapeutic communication from the first (case study) into demonstrating ways that you can engage the resident in their own care: asking questions about their health (and) asking them about what’s important to them,” Alana tells The OMNIway.

“One thing we always like to say is the resident is not on the to-do list; they are not on the list of objectives to do; they are a person, and we emphasize this constantly,” he says.

This is Part 2 of a two-part story.