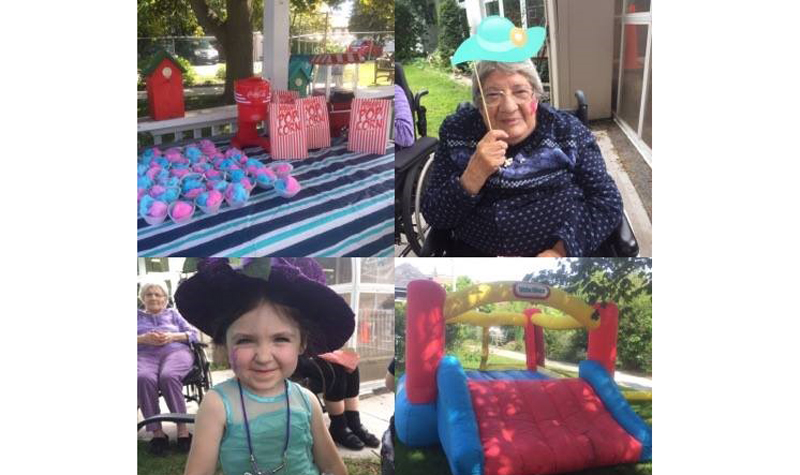 Carnival Day brought an afternoon of fun, laughter and good times to Streamway Villa, but it also proved to be a valuable forum for intergenerational programming, which the Cobourg long-term care home’s residents loved, organizers say.

Life enrichment aides Myriam Maheux and Tracey Neville collaborated to create the Aug. 17 event, which brought about 50 residents and children to the home. Staff members’ children and grandchildren were on hand as were many residents’ grandchildren.

The carnival featured a bouncy castle, games, a photo booth and face-painting. In keeping with carnival tradition, candy floss, slushies and popcorn were served.

But it was the interaction between residents and children that truly made the day special, Myriam says.

“I found that the residents were really glad to see some kids coming around,” says Myriam, who participated in Carnival Day for the first time.

“It was really nice to see the residents having such a nice time.”

The carnival’s attendees got lucky, weather-wise. Most of the day was sunny, but when it began to rain around 3:30 p.m., some of the festivities were moved indoors.

Tracey says she last helped organize the carnival in 2011. She says she enjoyed working with the life enrichment department to create this year’s event and hopes to continuing do so.

“It was wonderful; we had lots of kids come out, a few of the residents’ grandchildren came, and the residents just sat and soaked it in – they loved it.”

Like Myriam, Tracey says one of the most important aspects of each Carnival Day is the intergenerational programming that stems from residents spending time with the children.

“Everybody gets involved,” she says.

Looking ahead, Tracey says she hopes to increase advertising for future Carnival Days to bring even more people to Streamway Villa and “up it every year.”

“Hopefully, we can make it bigger and bigger,” she says.

Making the shift from ‘me’ to ‘we’ when caring for people with Alzh...
Scroll to top