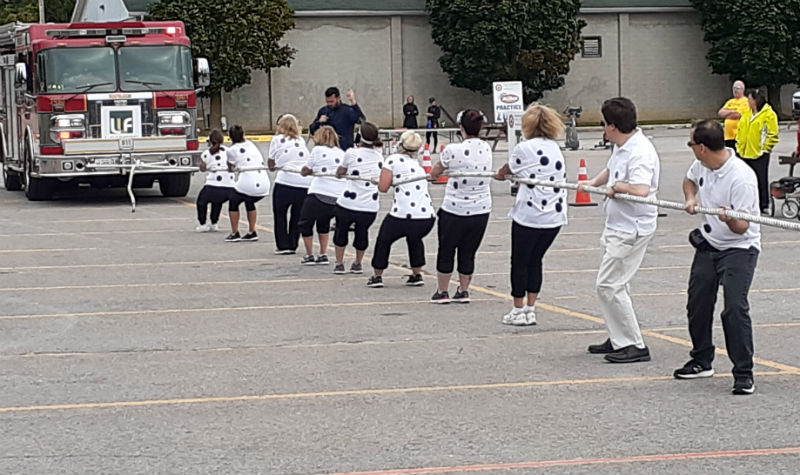 The Pulling for Our Residents team from Riverview Manor pulls a 44,000-pound fire engine in the Peterborough Memorial Centre parking lot Sept. 16 during the fifth annual Pulling for Dementia fire truck pull fundraiser.

PETERBOROUGH, Ont. – Pulling for Our Residents, a 10-member team representing Riverview Manor, raised $4,500 in support of the Alzheimer Society of Peterborough, Northumberland and Haliburton on Sept. 13 during the fifth annual Pulling for Dementia fire truck pull fundraiser in Peterborough.

This is the largest sum of money Riverview Manor has raised for any charity event, says environmental services manager Crystal Post, who organized the Riverview team.

“It’s incredible that we raised that much for the Alzheimer Society,” she said, moments after the Pulling for Our Residents team finished their pull.

During the event, which was held in the Peterborough Memorial Centre parking lot, teams had to pull a 44,000-pound fire engine 30 metres.

Pulling for Our Residents team members, who wore white T-shirts with black spots mimicking dalmatians, the dogs that traditionally accompany firefighters, completed the feat in 18.71 seconds.

Teams representing organizations throughout the region competed in the challenge throughout the day. The event raised $34,000 for the Alzheimer Society.

Crystal notes that staff members from every department at the Peterborough long-term care home were involved in the Pulling for Dementia event, making it “very much an around-the-home effort.”

Several family members, as well as Riverview Manor staff members who had the day off or were on holidays, turned up to cheer on the Pulling for Our Residents team, which Crystal says was also encouraging.

“It was wonderful to have everyone’s support before, during and after the event,” she says.

Personal support worker Katie Brown, who was a top donation gatherer for the Riverview Manor team, explains how she encouraged people to donate to the fundraiser and why the event was important to her.

“I just went around explaining what the cause was for, and pretty much everyone was eager to help out,” she says. “It’s something that’s really close to me; I lost my grandmother to Alzheimer’s and there are a lot of people who have Alzheimer’s and dementia, so this is definitely for a good cause.”

Crystal says she was not surprised by the outpour of support for the fundraiser from the Riverview Manor team and from family members.

“We see what the effects (of Alzheimer’s and dementia) are, and to find a cure would be wonderful, and that’s why we did this,” she says.

Residents revved up for car show
Scroll to top