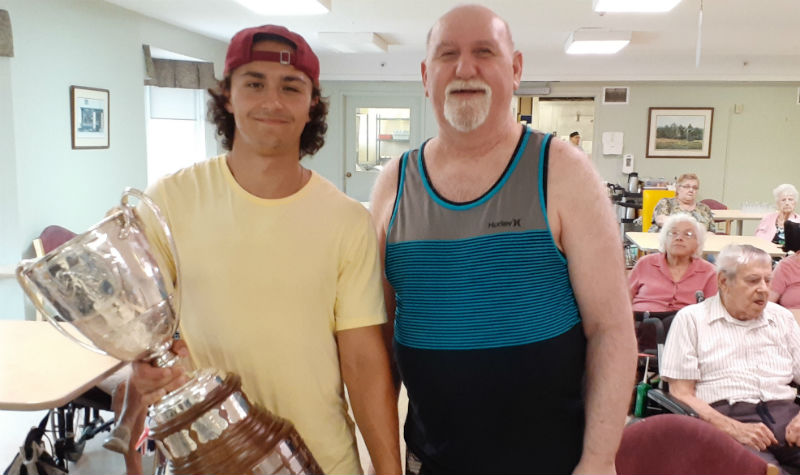 Cedric Ralph, the son of staff member Brigitte Byette and a centreman for the Guelph Storm, stopped by the Peterborough home with the J. Ross Robertson Cup on Friday

PETERBOROUGH, Ont. – Guelph Storm centreman Cedric Ralph stopped by Riverview Manor July 19 to show the Peterborough long-term care home’s residents and staff members the J. Ross Robertson Cup which his team won after beating the Ottawa 67’s in May to win the OHL championship and advance to the Memorial Cup series.

In fact, it was Cedric, the son of Riverview Manor team member Brigitte Byette, who scored the game-winning goal in Game 6 of that series.

While the Storm was eliminated from the Memorial Cup series by the Rouyn-Noranda Huskies, who would go on to take the 2019 Memorial Cup, winning the OHL championship is something Cedric will not forget.

History won’t forget either. The stick Cedric used to score the game-winning goal in the second period of Game 6, along with the puck, will soon be donated to the Hockey Hall of Fame in Toronto.

Each Storm team member is given one day with the J. Ross Robertson Cup. When the Riverview Manor team learned Cedric would be coming to the home with the cup, a small party was organized. The life enrichment team even invited some of Cedric’s former teachers from St. Anne Catholic Elementary School to attend.

Cedric explains why he used his day to bring the trophy to Riverview Manor.

“We always get a bunch of people (from Riverview) who come and watch me play when I come down to Peterborough, so I thought I would bring it in,” he tells The OMNIway.

Cedric spent about an hour chatting with residents and posing for photos with them next to the J. Ross Robertson Cup, which is awarded each season to the OHL championship and dates back to 1898.

Proud mother Brigitte says she was thrilled with her son’s idea to bring the trophy to Riverview Manor because some residents are big OHL fans.

“When he told me (he wanted to bring the cup to Riverview), I told him I thought that was a great idea,” she says.

Homes beat the heat with ingenuity