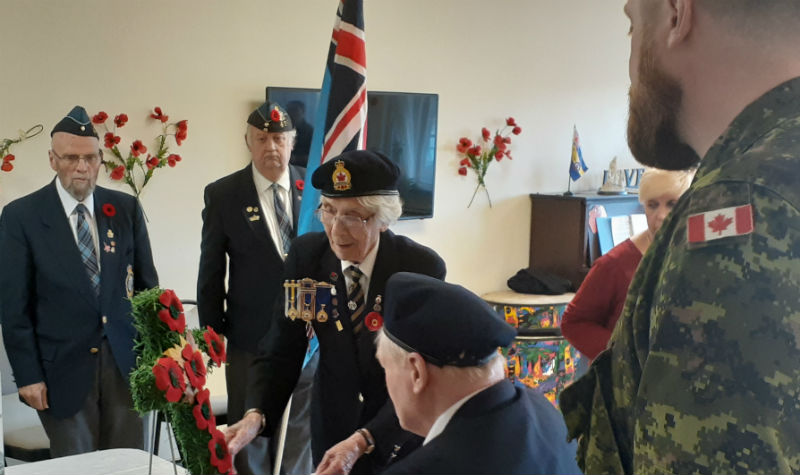 PETERBOROUGH, Ont. – About 70 residents, along with staff members, families and other visitors, attended Riverview Manor’s early Remembrance Day service on Nov. 8 to honour veterans and remember those who made the ultimate sacrifice during wartime.

Residents Joan Brownson, Rick Cosby and Frank Lindsay wore their legion uniforms and sat at the front of the room for the one-hour afternoon ceremony in honour of Remembrance Day on Nov. 11.

Joan, who served in the British Army during the Second World War, was accompanied by Rick and Frank as she laid a poppy-adorned wreath at the end of the service.

The ceremony began at 2 p.m. with members of the Royal Canadian Legion Branch 52 carrying flags into the Peterborough long-term care home’s south dining room to the sounds of bagpipe music from piper Master Corporal Maury McCrillis of the Hastings and Prince Edward Regiment.

At the end of the service, Canada’s royal anthem, God Save the Queen, was sung, and the bugle calls The Last Post and The Rouse were played.

“On behalf of the staff here at Riverview Manor, we would like to express our sincere thanks, gratitude and appreciation to all who participated in our service today,” said Riverview Manor life enrichment aide Rosemary Roseborough.