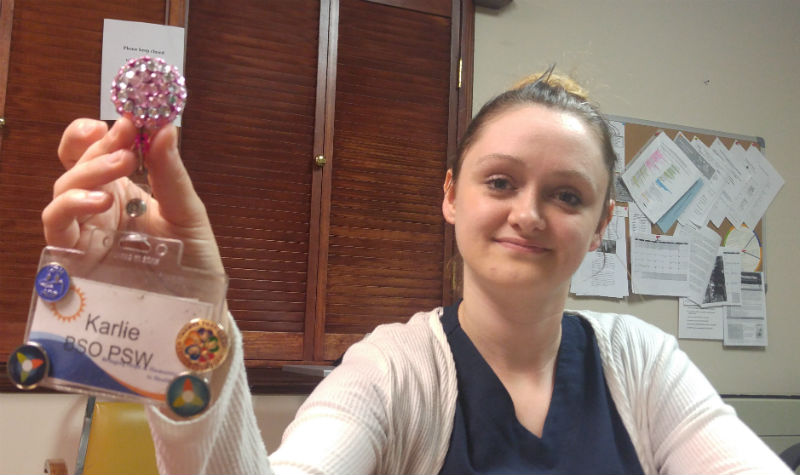 Riverview Manor BSO team member Karlie Phillips holds the costume-jewel-studded lanyard she made to prompt a resident to wear her decorative WanderGuard.

The BSO team works collaboratively to develop resident-centred tools to ease agitation a person is experiencing and enhance their living experience at the Peterborough long-term care home.

Recently, when one resident began leaving “inappropriate notes” for staff, BSO team members Karlie Phillips and Allison Juniper created a plan to harness the resident’s flair for writing and direct it towards something positive.

Since the resident liked to write, personal support worker Karlie Phillips and life enrichment aide Allison Juniper asked if she would like to become pen pals with a resident at Burnbrae Gardens, an OMNI Health Care home in Campbellford.
The resident was interested.
Initially, Karlie’s plan was to have the resident write letters to her and Karlie would respond with a letter. But Allison, who also works at Burnbrae Gardens, had a resident at that home in mind who would benefit from such a relationship.

The residents have been writing to each other about their hobbies, where they have travelled, where they grew up and their occupations.

“This has turned out to be a fantastic idea for the resident,” Karlie says.

BSO team members were also thinking outside the box when they came up with an idea to encourage a resident to always wear her WanderGuard bracelet, a safety device worn by residents who exit-seek that triggers an alarm if they get too close to doors leading outside.

The resident would either forget or refuse to wear her bracelet, so BSO team member Carly Kenny took the resident’s WanderGuard and decorated it with costume jewelry so it resembled a fancy brooch.

The resident loved her new fashion accessory; however, she’d often forget to put it on.

So another team member came up with the idea of having the front-line staff members who work most with the resident to decorate the lanyards that hold their name tags with same plastic jewelry to prompt the resident to wear her WanderGuard.

“So that’s what we did and it has worked fantastically,” Karlie says. “She sees ours now and says, ‘Where’s mine?’ if she’s not wearing it.”

Becky, who is the Riverview Manor BSO team lead, says receiving the honour is important to team members because it shows the work they’re doing is being recognized from outside the home.

“I think it means that we are making an impact, not just within the home, but also within the community,” she said.

If you have a story to share about successes your home’s BSO team has created, please contact the newsroom at deron(at)axiomnews.com.