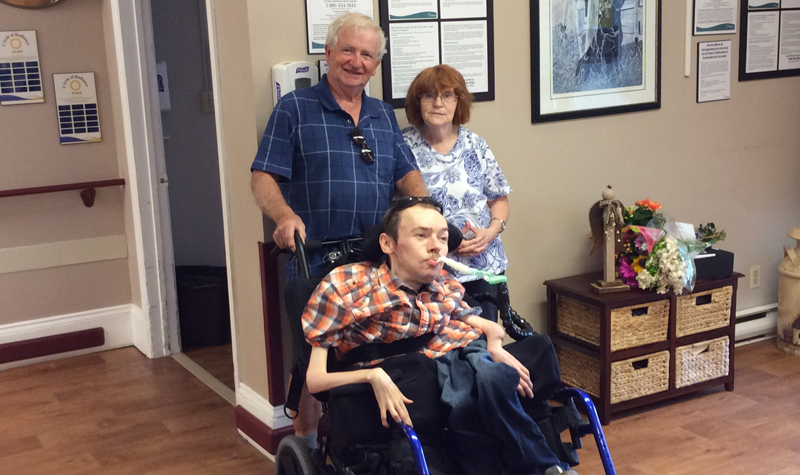 Colleagues wanted to honour Janet Akey, who served as a PSW for 34 years, for her hard work and compassion

When Janet Akey walked through the doors of West Lake Terrace on April 17, she thought she had been called in to sign some papers.

Janet had retired in June, after serving 34 years as a personal support worker (PSW) at the Prince Edward County long-term care home.

What she found when she arrived was a small ceremony that had been planned to honour her as a recipient of the home’s 2017 Everyday Hero Award. Life enrichment aide Eileen Goheen was also presented the home’s Inspired Leadership Award during the ceremony.

Janet’s husband and son had been ben tipped off about the ceremony and were waiting for her when she arrived.

“Janet had no idea that she was here to accept the award; it was a great surprise,” says Janie Denard, the home’s life enrichment co-ordinator, who was one of the “conspirators” involved in the ruse.

A group of West Lake Terrace staff members nominated Janet for the Everyday Hero award, which is given out annually by each of OMNI Health Care’s 18 long-term care homes to recognize staff members who demonstrate extraordinary dedication to residents and co-workers.

“She is always happy and remains calm no matter what is happening,” West Lake Terrace team members say of Janet in their nomination.

“Janet leads a busy life caregiving for her adult son on her off hours and sometimes comes to work with little sleep, yet never once has she let that affect her work or care for her residents.  She also has never complained to the team that she was tired.

“She is one of the kindest and compassionate people we know.”

Janet’s colleagues say they also wanted to honour her with the Everyday Hero Award to thank her for mentoring so many staff members and “providing us with an example of a PSW we can only hope to live up to.”

OMNI announced this year’s recipients of the Everyday Hero, Inspired Leader and Elisabeth Hinton Memorial awards at the Quality Forum in Calabogie, Ont. in May. Managers from OMNI’s long-term care homes were presented with the names of the award winners. Homes are presenting the awards during their own ceremonies.

Making the shift from ‘me’ to ‘we’ when caring for people with Alzh...