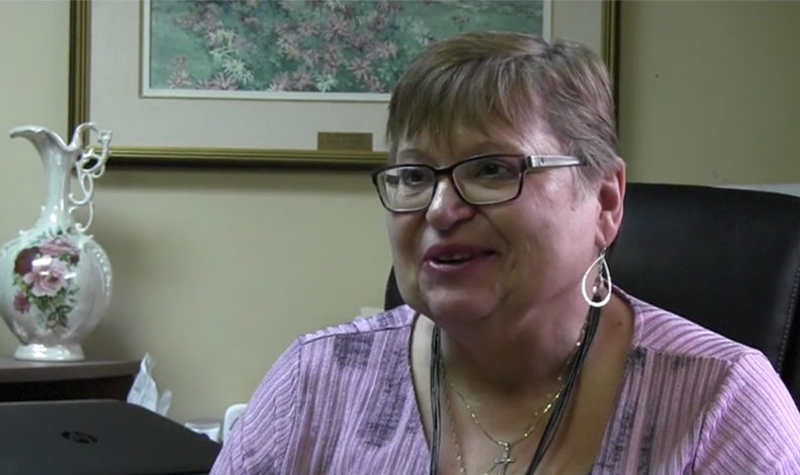 Linda Pierce has been Village Green’s administrator since 1991.

‘It’s a changing environment but it is extremely rewarding,’ says administrator Linda Pierce

Linda Pierce says she has seen a lot of changes in her 28 years as Village Green’s administrator, both to the Greater Napanee home itself and to the long-term care sector, but what has remained constant is the high level of resident care and the family atmosphere.

One of the major changes Linda points to is the Long-Term Care Homes Act, which came into effect July 1, 2010. She characterizes the change as moving from an “advisory process to an inspector process,” but that this was something the Village Green team has been able to adapt to with success.

“It was an interesting change,” she says. “This home, in its history, we really haven’t had a lot of orders or … unmet standards. It has been a really good home. I feel like we’re serving our people very well.”

Another big change she has seen is with the home’s physical layout. Village Green has had major renovations over the years: the lobby has been expanded to provide residents with more room and give it a “more homelike” atmosphere, Linda notes. Furniture has also been updated and modernized, which has been a big plus for residents, families and staff members, she adds.

Linda says one of the most significant changes to resident care came with the introduction of the Behavioural Supports Ontario (BSO) program in 2012.

BSO is a provincial initiative that’s enhancing quality of life for seniors affected by dementia and other conditions that can cause agitation. The funding, which is provided to long-term care homes through the province’s 14 Local Health Integration Networks (LHINs), is largely put towards staff education.

As a result of having a BSO team in place, Village Green is focusing on preventing agitation in residents with cognitive impairment, rather than addressing issues as they arise.

“Before we were doing a lot of reactive (work), where you would have a resident with an issue and you were responding to that immediately, where now, before the event happens, we have done work so that event is now minimized,” Linda says.

Linda says the most important ingredient to Village Green’s success adapting to changes at the home and in the sector have been the staff members, whom she says are like “family.”

“There is staff that has been here a long time; I have staff who has been here almost 40 years, and it’s really a family,” she says. “They’ve really helped me in different situations personally and professionally. We get through and it makes us stronger. …

“It’s a changing environment but it is extremely rewarding.”

Village Green is celebrating 40 years in the community of Selby in 2018. Throughout 2018, The OMNIway will be featuring stories and videos about home’s residents, staff members and volunteers.