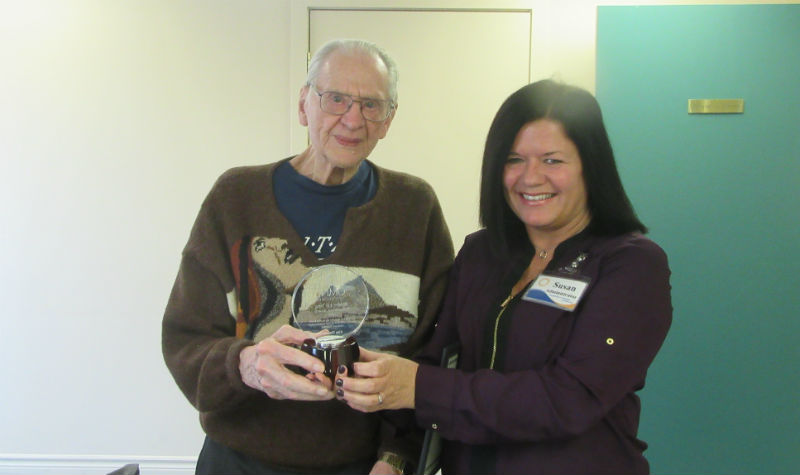 Every person living in an OMNI Health Care long-term care home has their own unique story. Many residents have led lives dedicated to their country and their communities, which is why OMNI created the Lifetime Achievement Award to honour people for their contributions.

The 2018 Lifetime Achievement Award recipients come from a wide range of different backgrounds, but they all have interesting stories to share that we can learn from.

Forest Hill Lifetime Achievement Award recipient Alex Classen served Canada in the Second World War and today serves as an advocate for his fellow residents at the Kanata, Ont. long-term care home by being active in its residents’ council. 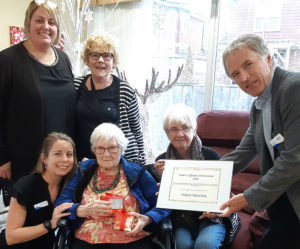 Alex has a colourful military background. He joined the Royal Canadian Air Force during the Second World War when he was only 19. He served on the Liberator, a B-24 bomber, and was stationed in India, as well as the Cocos Islands, where he and his crew flew missions over Burma (today called Myanmar) and Thailand for the allied forces, explains Forest Hill life enrichment co-ordinator (LEC) Craig Forrest, who nominated Alex for the award.

At Forest Hill, Alex is active in the residents’ council, often advocating for his fellow residents, Craig says, adding Alex enjoys sharing his stories from the war with residents and staff members.

“Alex is very independent and is always happy to talk with fellow residents and staff about his interesting past,” Craig says.

“He always treats staff and fellow residents with dignity and respect. Alex has done so much for this nation and the western world in his lifetime and is a true hero. I can think of no one who is more deserving of this award.”

Verna, 102, not only demonstrated she had a sweet disposition and a kind soul, she was also a treasure trove of stories and life experience.

Born Sept. 22, 1916, Verna was one of eight children in her family. She grew up on a 160-acre farm in northern Ontario at the height of the Great Depression. Verna wrote of her and her family’s experiences during the Depression in her 2001 memoir Of Turnips and Teas and Threshing Bees: My Experience of the Depression Years.

Her memoir is a remembrance of the good times, the hardships, the methods of work and the general thinking of a farm family in the early- to mid-20th century.

The Streamway Villa life enrichment department was so taken by Verna’s memoir, it became the centre of a program called Verna’s Reading Circle. During this program, the life enrichment aides gather most of the home’s 59 residents and read chapters from the book. 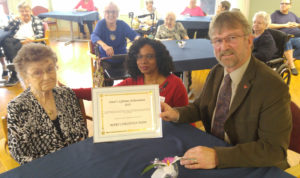 “During this time, Verna sits back with a smile on her face as she relives her life history and is quick to add any additional details during the reading,” Christina says.

“Verna has 100 years of memories in which she wanted to share and to encourage others to follow her footsteps daily; her philosophy is that ‘when you work hard, the benefits of life follow.’ ”

Frost Manor resident Chris Todd worked for many years as a nurse, and her career began with her caring for victims of war. For her career in nursing and her dedication to the profession, Chris received Frost Manor’s 2018 Lifetime Achievement Award.

Chris was born in County Mayo, Ireland. In June 1940, when she was 19, she left Ireland to take her nursing training in England. The Second World War was underway. The day after she moved into her residency, Germany began its air operations over Britain. This was followed that July by the Battle of Britain, the first major battle fought entirely by air forces, which lasted three months.

To say the least, this was a challenging start to Chris’s career, her son, Gerry Todd, said during the ceremony.

“That was her introduction to nursing,” Gerry said. “You can imagine what it would have been like back in those days growing up, just 19 years old, away from home, and this is what happens.”