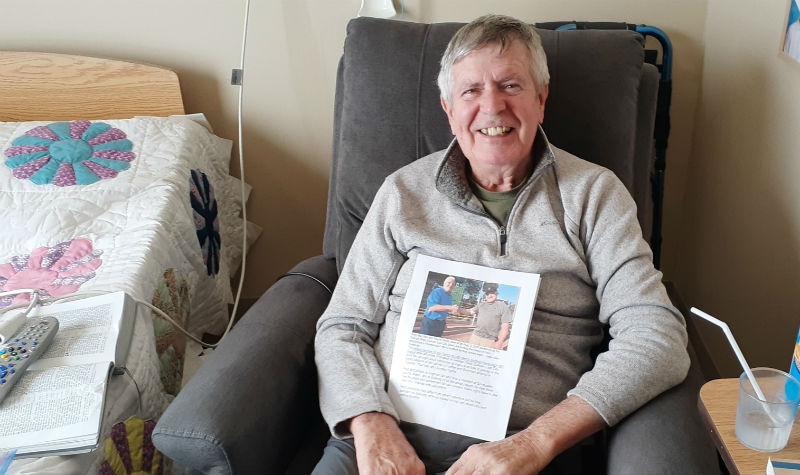 Springdale Country Manor resident Fred McCormick poses with a printout from the Feb. 4 edition of the Peterborough Examiner featuring the “dream list” of local fastball players he created.

Springdale Country Manor resident Fred McCormick is a lifelong baseball fan, and he was a big-time supporter of the Peterborough City Men’s Fastball League, which folded at the end of January after 98 years.

With the league gone, Fred got to thinking about some of the games he’d seen at the George (Red) Sullivan East City Bowl as well as the players he had known and watched play over the years.

He put together a fantasy team of some of the most memorable players from the league posted at each position.

With the encouragement of Springdale Country Manor life enrichment co-ordinator Sonia Murney, Fred submitted his “dream list” to the Peterborough Examiner, which published it in the newspaper’s Feb. 4 edition.

To make the list as complete as possible, Fred even included memorable umpires, fans, a water boy and a scorekeeper.

Fred recalls how the bleachers at the East City Bowl used to be packed during league games and how his mother would sometimes drop him off at the stadium so he could watch.

“I used to love to read about the teams in the paper or go over to the games,” Fred says.

Here is the list that Fred sent to the Examiner: