Recent News
You are here: Home1 / Recent News2 / News3 / ‘My dad showed me what I was supposed to do in life’ 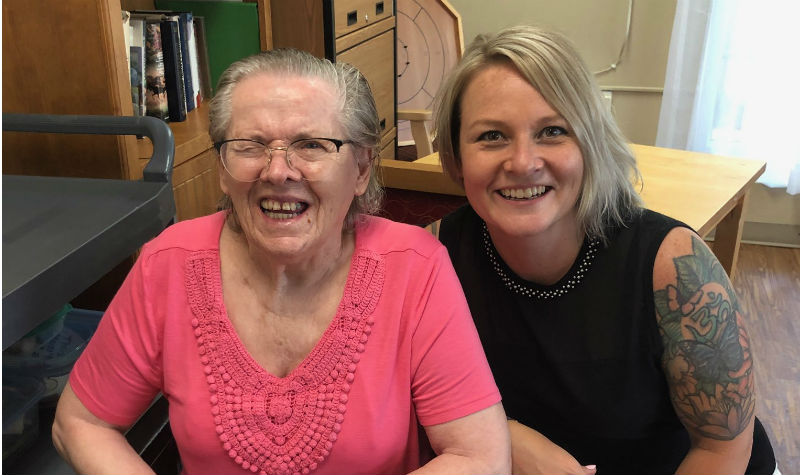 Streamway Villa’s new LEC, Laurie Kracht, says caring for her father inspired her to pursue a career in LTC

Laurie Kracht became Streamway Villa’s new life enrichment co-ordinator (LEC) in early July, and she credits her late father for inspiring her to take the career path that brought her to the Cobourg long-term care home.

About five years ago, Laurie moved back home to help her mother care for her dad, who had been diagnosed with dementia.

Eventually, Laurie’s father needed hospital care, and, after spending several months in and out of hospital and waiting for a bed in a long-term care home, Laurie’s father moved into Streamway Villa. He passed away three weeks later.

But Laurie says during his time at Streamway her father was happy and was receiving excellent care.

Laurie saw the difference that people working at Streamway Villa made in her dad’s life.

“It was the first time I had seen my dad smile in a long time because he had been in and out of the hospital for a long time,” she tells The OMNIway.

While caring for her dad at home, Laurie was also enrolled in the fitness and health promotion program at Durham College.

She followed up by taking the gerontology and activation program at Durham College and is currently taking online classes in the recreational therapy program at Canadore College.

Seeing her father so happy while living at Streamway Villa inspired Laurie to pursue a career where she could advocate for seniors.

“That’s when I knew that this is what I wanted to do,” she recalls.

Laurie and her mother moved to Cobourg. Laurie worked in an adult day program as well as in the local hospital.

She started working part-time at Streamway Villa in January. She says there’s been no looking back for her.

“This is where I am supposed to be and I knew it from the get-go,” she says. “My dad showed me what I was supposed to do in life.”

This is Part 1 of a two-part story.

Springdale getting creative to keep residents and staff cool
Scroll to top
https://omniway.ca/what-is-the-best-vacuum-cleaner-to-buy/