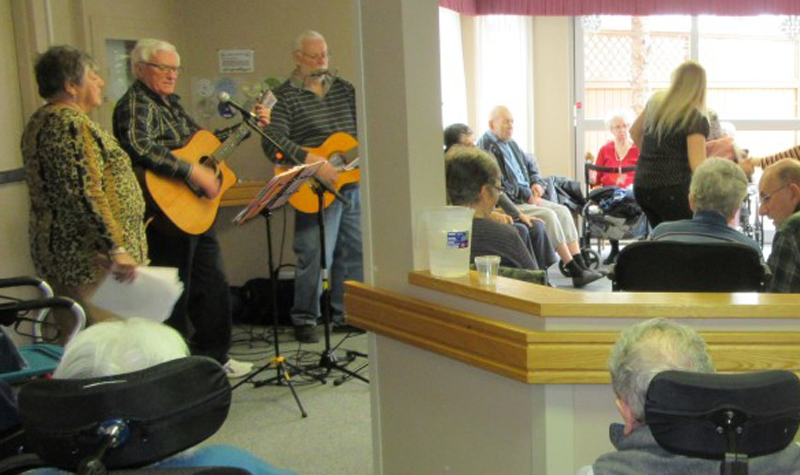 Gerry Armstrong is thanking Forest Hill staff and volunteers for supporting a musical program for residents that’s making a difference.

After his wife, Becky, moved into Forest Hill in 2013, Gerry began bringing his guitar into the home to play for her (see Part 1 of this story). In short time, he noticed other residents were enjoying the music. Before long, Gerry was playing for larger groups of residents at the Kanata, Ont., long-term care home.

Since March, Gerry has been performing regularly with another family member, Andrew McWeeny, who was recruited through an ad in the home’s newsletter. The pair will often meet to discuss which songs to perform for residents and to practise. Another family member, Brian Osborne, works as their “roadie,” helping the Gerry and Andrew set up their equipment, engaging residents and assisting those who want to dance.

The pair’s set list mainly consists of rock, country and folk music from the 1950s to the 1970s. He has brought his laptop into the home to play different types of music for people. He also watches how residents react to the songs he and Andrew perform.

“I don’t just go there and play music – I am always observing,” he tells The OMNIway.

And it’s not just the two guitarists who are making this program possible, Gerry says. Life enrichment co-ordinator Craig Forrest has been supportive of the program. Life enrichment aide Shannon Lynch, who porters residents to the program and encourages them to dance, has also been a great help.

Gerry says he has seen music have a positive impact on residents with aggressive behaviours. He recalls how one resident who was agitated before a performance quickly became calm – and happy – 15 minutes after the music began. The resident even apologized afterwards.

“I think the music has a neutralizing effect on people with these types of anxieties,” Gerry says. “Let the music see what it can do. That’s my strategy.”

Gerry adds that the more he plays for residents, the more he learns about how to support people with cognitive impairment.

“This is two-way – I am benefiting from this, too,” he says. “I am also going through this journey.”