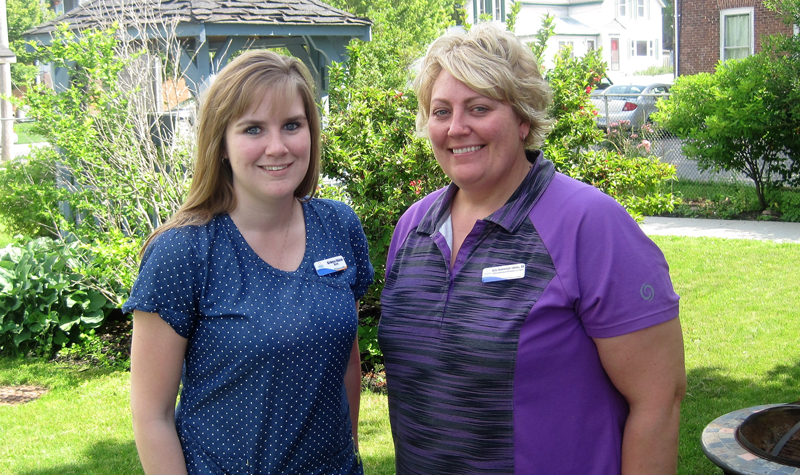 In addition to working at the Cobourg home for four years, Kristyn worked at another long-term care residence and brings a wealth of experience to the position.

Prior to accepting the position, Kristyn completed BSO training courses at Streamway and was involved with successful interventions to prevent responsive behaviours from residents with cognitive impairment.

Seeing the positive impact BSO interventions have had on residents is something that drives Kristyn, she says.

“It’s exciting to see the changes because the behaviours decrease,” she tells The OMNIway. “It’s nice to see those positive changes.”

These positive changes can come from simple interventions. If a resident is confused or wandering, a staff member might hand the resident something that piques their interest, like a puzzle or newspaper.

One resident, for example, has verbal challenges. Staff members have found that giving him a picture board to point to helps him communicate, Kristyn says.

“Staff will ask him what he would like and he will point to the pictures and the words he wants to tell us – and we’re more likely to understand him and do what he wants, which prevents behaviours,” Kristyn says.

Streamway Villa began receiving BSO funding in 2012. Since then, the home has seen a sharp decline in aggressive behaviours resulting in a better quality of life for the 59 people who call Streamway Villa home.

Because the program has worked so well, it has garnered buy-in from staff members, Kristyn says.

“They are definitely adapting (what they learn) and that’s helping everyone: the residents have less behaviours. We still have behaviours – they’re always going to be there – but we know how to manage them better,” she says.

BSO is a provincial initiative to help enhance quality of life for seniors affected by dementia and other conditions that cause agitation. The funding, which is provided to long-term care homes through Ontario’s 14 Local Health Integration Networks, is largely put towards staff education.

This is Part 1 of a two-part story.