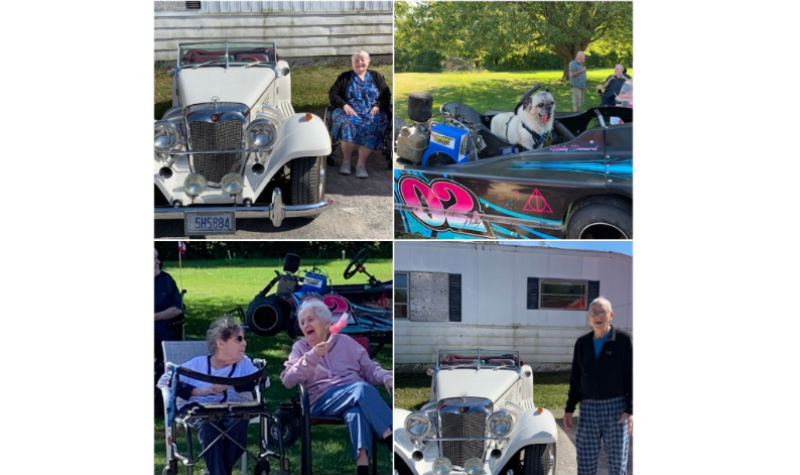 Vintage cars and sweet treats were among the features of the festival at the Prince Edward County long-term care home.

After deciding not to attend the community fair in Picton, residents chose to host their own instead Sept. 19 at the Prince Edward County long-term care home.

Forty-three residents and 15 family members attended along with staff.

“Everyone really enjoyed it and there were a number of families who dropped in,” says Jackie Maxwell, West Lake Terrace’s administrator and director of care.

The idea for the fair arose from a residents’ council meeting during which residents considered how to spend a donation from the family member of a former resident.

“It turned into a really good conversation and they began to take notes and I started getting things organized,” Janie Denard, life enrichment co-ordinator (LEC), tells The OMNIway.

As she booked different features for the fair, she updated residents on her progress and solicited feedback to ensure the event reflected their desires. “We talked about it again at council and confirmed things. Spreading the word about it really sparked some interest with residents and families,” Janie added.

“The fairs are nice, but not everybody can attend so it’s kind of nice they came up with this idea and hopefully every year we can continue to build on it.”

With sweet treats, a crown and anchor game and vintage cars, there was something for everyone.

Janie also invited her daughter, who races go-karts, to attend. Twelve-year-old Holly is well-known by residents who often ask Janie how her daughter’s racing is going. Holly brought her trophies and photographs and offered to sign autographs.

The donor who made the event possible, Bob Scrivens, was “a huge part of our West Lake Terrace family.” He ran a spiritual support group and a bible study while his wife, Mary, was a resident, the LEC notes.