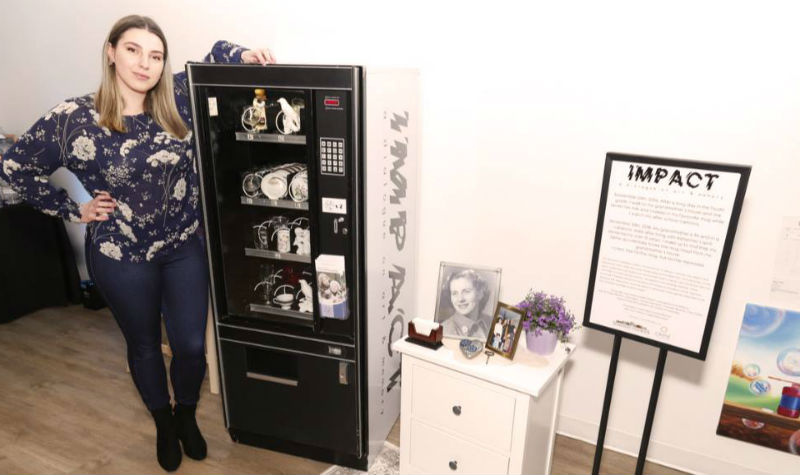 Artist Sara Dalla Guarda is pictured here with IMPACT, an interactive art installation she created to demonstrate the relationship between shattered objects and memories.

The art piece, designed by artist Sara Dalla Guarda and co-sponsored by OMNI, gets people thinking about Alzheimer’s and dementia in a different way

IMPACT is a vending machine filled with fragile items such as teacups, plates and figurines. People put 50 cents into the machine and choose an item, which will fall from its place behind the coil dispenser and shatter as it hits the delivery tray.

Sara describes IMPACT as not only a piece of artwork but also a conduit for getting people to think about how people connect memories to objects.

She also notes there is a direct correlation between watching the items shatter and Alzheimer’s and dementia, which is what prompted her to design IMPACT (click for Part 1 of this story).

Once a person becomes affected by these conditions, their family and friends continue to hold on to their memories of the person before their diagnosis, much like they may hold on to memories connected with a shattered cup or plate.

IMPACT is also meant to be a tool to foster discussions “to understand, prevent and plan ahead for a future with Alzheimer’s and dementia,” something that’s not always easy to do, the artist says.

“By displaying my piece at different shows and having the opportunity to discuss it with others revealed to me that about every nine out of 10 people are affected by Alzheimer’s – be it that someone close to them has it or that they are caring for someone with it,” Sara tells The OMNIway.

During the OLTCA/ORCA conference, Sara says some attendees walked past her exhibit and were confused at seeing a vending machine stocked with teacups and plates rather than the usual pop, potato chips or chocolate bars.

Others didn’t understand the piece at all, she says, adding some people asked if they could buy the items inside rather than watching them shatter.

“And then there were those that understood it and were ecstatic about its creation,” Sara says. “Almost all of these people were those with one or more family members who suffer from Alzheimer’s and, by seeing my piece, were forced to reminisce about items they associated with their loved ones and that have great sentimental value to them.”

Sara says one person recalled to her how she kept her grandmother’s cream container that she still cherishes. Another person remembered the specific texture of the plates her mother used to set down every Thanksgiving. This memory brought tears to the woman’s eyes, Sara says.

“Can you imagine that? A delegate crying in the middle of a health-care conference after seeing a small installation piece by some nobody art student,” Sara says.

“That affected me the most that day, showing me that my art has more meaning to others than I thought.”

You can visit Sara’s website to learn more about IMPACT.