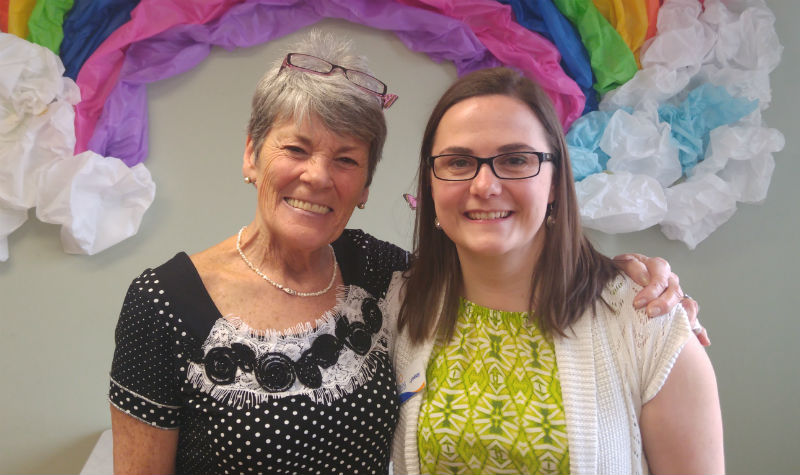 ‘When she first came here, she burst in with energy and she just started helping – it was something she just didn’t think anything of’

When her father moved into Frost Manor in July, Helene Waddell says she immediately sensed the warmth and love that staff members at the Lindsay long-term care home have for residents. She also felt the need to help, so Helene quickly began visiting with other residents when she was at Frost to see her dad.

By January, life enrichment co-ordinator Lyndsay Burton asked Helene to come on “officially” as a volunteer, which she did. Lyndsay describes Helene as a “natural volunteer.”

Helene brings lots of enthusiasm to her volunteering role, and she has been a great fit at Frost Manor, Lyndsay adds.

“When she first came here, she burst in with energy and she just started helping – it was something she just didn’t think anything of,” Lyndsay says. “When a volunteer is really excited about what they’re doing, the residents are going to get excited.”

As a volunteer, Helene helps with programming, feeding during mealtimes and does one-to-one visits with residents. She says spending one-to-one time with residents is particularly important because many residents do not have family members or their families don’t live in the area.

“I give lots of hugs,” Helene says. “I’ve adopted a couple of mothers here.”

While she enjoys the time she spends visiting residents, Helene says being a volunteer at Frost Manor is also personally rewarding. Residents, she says, “are giving to us as much as we are giving to them.”

“My favourite part of (volunteering at Frost Manor) is the sense of belonging,” says Helene, who also serves on home’s family council. “The residents are happy to see you, and the staff here is amazing. I love being here.”

Helene was one of the volunteers Frost Manor honoured at the home’s annual volunteer luncheon on April 5. Volunteers were treated to a Mexican-themed lunch prepared by nutritional care manager Zach Jarvis and his team that included chicken chimichangas, Mexican corn and rice.

Therapy dog Vezna is putting smiles on faces, one resident at a time