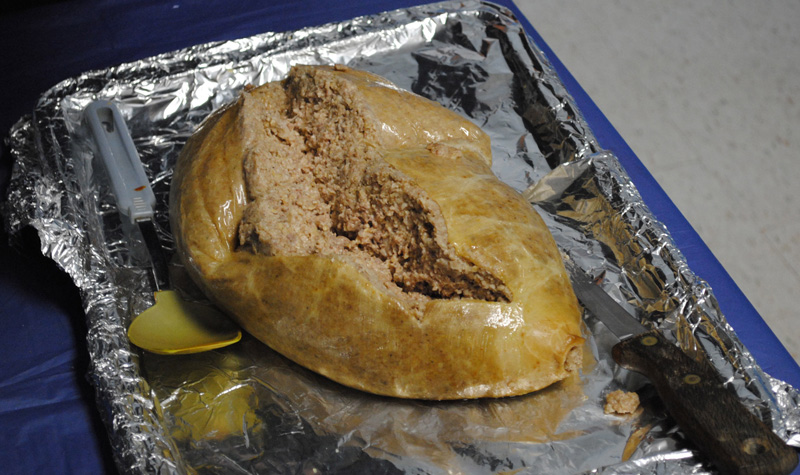 Pictured above is a haggis, the traditional Scottish meal consisting of minced organ meat, suet, onion, oatmeal and spices that’s baked in a sheep’s stomach. Haggis is the centrepiece of Robbie Burns Day celebrations.

‘Resident engagement is what really made it great’

In fact, residents and staff members had so much fun celebrating the 257th anniversary of the birth of Scotland’s most famous poet that they forgot to take photographs, laughs life enrichment co-ordinator Candice Stewart.

The centrepiece for the event was a haggis, the traditional Scottish meal consisting of minced organ meat, suet, onion, oatmeal and spices that’s baked in a sheep’s stomach

Nursing administrative service manager Wendy Logan began the event by reciting Burns’ poem Address to a Haggis before cutting into the tube of meat which was then scooped onto a plate and served with crackers.

It was evident that many residents were well-versed in the works of Burns, who is also known as “the Bard.” Some of his best-known poems include A Red, Red Rose, The Battle of Sherramuir and Auld Lang Syne.

A CD of traditional Scottish music was put on, and residents and staff members danced the afternoon away. The event’s great success, Stewart says, was how everyone spontaneously joined in on the fun.

“Resident engagement is what really made it great,” she tells The OMNIway.

In fact, residents were engaged in the event before it began, Stewart says. On Friday, they created decorations and framed some of Burns’ poems with tartan designs. On Monday morning, before the party, some of the poems were recited.

Springdale Country Manor is home to one resident from Scotland and many others who have Scottish ancestry. The event was extra special for these residents, Stewart notes.

“They were reminiscing about their own heritage and about other events that they had been to over the years,” she says, adding that when she recited My Heart’s in the Highlands, the resident from Scotland began singing.

“He began singing the song and everybody clapped,” Stewart says. “And then another resident came up and sang A Red, Red Rose. … As soon as the residents heard the poems and the music, it brought something out in them.”

The event also produced a special moment for Stewart – it was the first time she had tried haggis.

“It wasn’t bad; it was much better than I had anticipated,” she chuckles.

OMNI focusing on taking successes to the next level in 2016