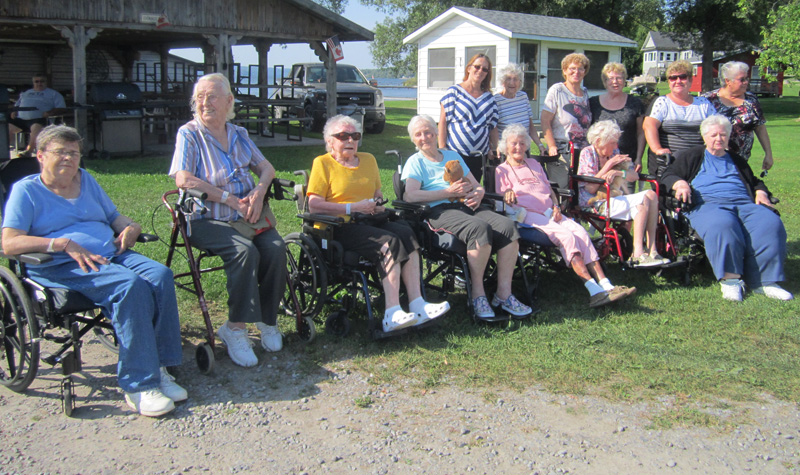 Frost Manor residents are seen here during their stay at Camp Cherokee in September. The residents were joined by people living at Extendicare Kawartha Lakes on the two-day outing.

Strengthening community ties is one theme that has been central to the folks at Frost Manor throughout 2015.

For many years, the Lindsay long-term care home has enjoyed strong connections to community members, local organizations and other homes.

These connections have helped enhance quality of life for the 62 people living at Frost Manor during 2015. Here are some of the highlights:

On July 2, an anonymous gentleman who had previously donated a piano to Frost Manor, once again showed up during the residents’ annual strawberry supper to drop off a “very generous” cheque which he asked to be given to residents’ council.

The donation has been used in a variety of ways. The money helped spruce up the home’s garden, provided in-home entertainment and day trips.

“There are lots of little extras we will be able to put the money towards,” life enrichment co-ordinator Vi O’Leary said at the time.

In early September, 14 residents from Frost Manor and Extendicare Kawartha Lakes were treated to a three-day outing at Camp Cherokee as part of an ongoing partnership between the long-term care homes.

For 11 years, Frost Manor and other long-term care homes in the region have collaborated to create outings for residents that are both meaningful and cost-effective.

The partnership sees the homes share the costs for everything involved with the annual outing, including accommodation, food, transportation and entertainment.

“The networking is wonderful,” O’Leary said in September. “The big issue (with outings) is always money and if you’re by yourself you can’t afford to do all these things.”

On Oct. 7, St. Paul’s Anglican Church invited Frost Manor and other Lindsay long-term care homes to an early Thanksgiving meal, which O’Leary says was enjoyed by residents and staff members in attendance.

Everything from the food to the sermon delivered by Rev. Warren Leibovitch to the social aspect made the event special for residents, O’Leary says, adding Frost Manor has been invited to St. Paul’s Thanksgiving, Christmas and Easter events for more than 10 years.

Aside from providing a wheelchair-accessible service and a lunch, St. Paul’s also provided transportation for the residents, volunteers and staff members attending.

O’Leary says she “cannot thank (St. Paul’s) enough” for the church’s efforts to include long-term care residents in many of its activities.

“(St. Paul’s goes) above and beyond for long-term care residents,” O’Leary said.

O’Leary noted that community support for long-term care homes from organizations in Lindsay is “outstanding.” In addition to St. Paul’s Anglican Church, Frost Manor and other area long-term care homes have worked with the local branch of the Royal Canadian Legion and the Moose Lodge before it closed.

Video captures many of OMNI’s 2015 highlights