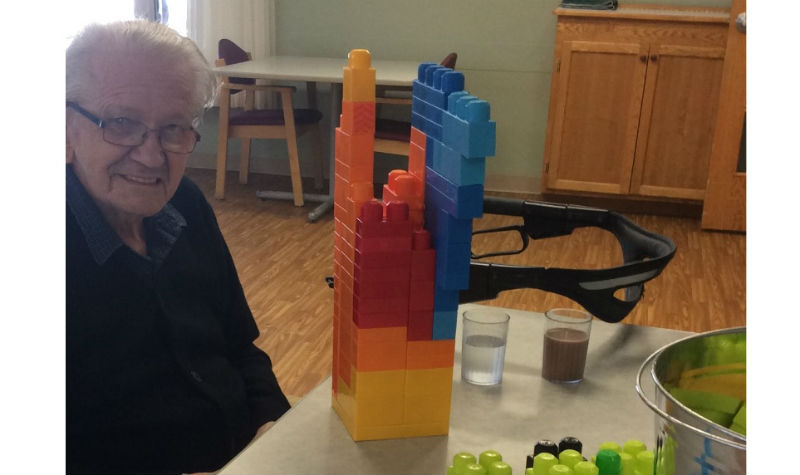 Frost Manor resident Melvin Killens is pictured here with a tower he created with life enrichment aide Amy Whitehead during a recent outbreak at the home.

By stepping up one-to-one programming and communicating with each other to discuss ideas and outcomes, the Frost Manor life enrichment team was able to engage nearly all of the Lindsay long-term care home’s 62 residents in activities during an outbreak in January.

During outbreaks, team members reduce contact between residents to prevent the spread of illnesses. This results in large-group programming being cancelled and one-to-one programming increasing, the LEC adds.

However, it’s often a challenge to see each resident to meet their recreation needs, Lyndsay says, adding that a benefit of large-group programming is that it’s a way for life enrichment departments to reach as many residents as possible.

During the outbreak, residents were engaged in one-to-one activities, such as painting and craft programs, while other residents completed puzzles on tablets or played memory games. Some residents even used their construction skills with Lego pieces to build sturdy towers and structures.

“When on outbreak, the need for quality programs does not go away,” Lyndsay tells The OMNIway. “(During the recent outbreak) it was all hands on deck to spread our efforts and make sure that everyone enjoyed programs for the duration of the outbreak.”

Team members record each resident’s activity participation in a charting program called ActivityPro. ActivityPro creates statistics, charts and data to provide a glimpse of how well each resident is doing individually as well as how well all of the residents are collectively benefiting from programming.

Frost Manor life enrichment team members try to engage every resident in programming, with a goal to reaching at least 85 to 90 per cent of residents each week, Lyndsay says.