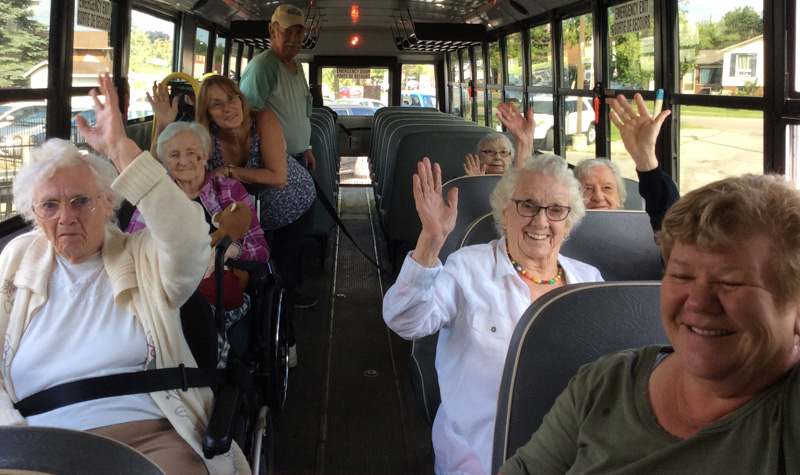 Pictured above, Frost Manor residents and staff are on a bus heading to Camp Cherokee on Rice Lake.

She is especially happy to report that although she didn’t think she was going to be able to take a pontoon-boat ride during Frost Manor’s annual trip to Camp Cherokee, staff at the camp made sure she got on board.

Leslie, who uses a wheelchair, didn’t think she’d be able to get on the boat, even though she wanted to take the trip.

“I said, ‘park me in the shade and I will wait until you come back. But (the camp staff member) said, no I’d like to take you,’ so they got me on the boat. I got to sit at the front,” Leslie says. “It was a lot of fun – that was my first time to Rice Lake.”

For 12 years, Frost Manor and other long-term care homes in the region have collaborated to create outings for residents that are both meaningful and cost-effective. This year the Frost Manor group was joined by seven residents as well as staff members from Extendicare Kawartha Lakes.

Some years Frost Manor has collaborated with as many as four other long-term care homes in the region to make the outing possible.

This year’s outing, which was from Aug. 30 to Sept. 1, included two barbecues and a dance night.

Life enrichment co-ordinator Vi O’Leary says the residents always had something to do during their three-day stay.

“They played cards, they had happy hour two days in a row. There was lovely weather and there was no agenda – the residents were on holidays and they could do whatever they wanted to do,” she says.

(VIDEO) Music and Memory: see the positive impact this program has on Streamway...

Inspired Leader came to Wildwood looking for a job, ended up with a career
Scroll to top
https://omniway.ca/what-is-the-best-vacuum-cleaner-to-buy/