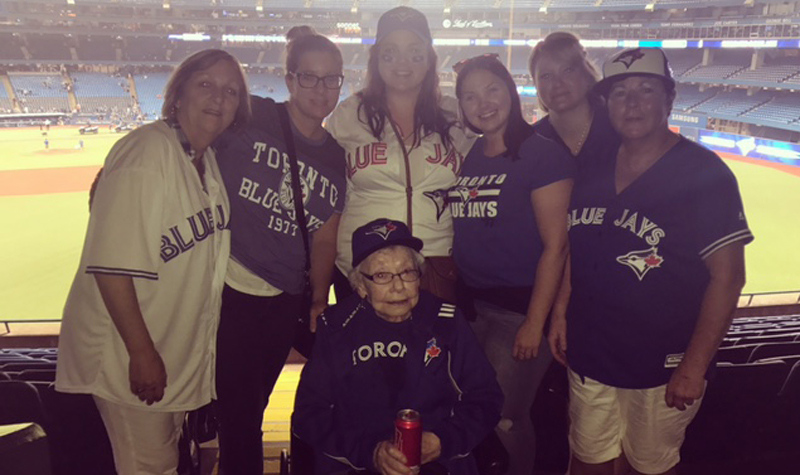 Resident Joan Taylor is seen here with staff members from Frost Manor during a Toronto Blue Jays game at Rogers Centre on Sept. 19.

Frost Manor resident Joan Taylor enjoyed a girls’ night out with six staff members Sept. 19 when the group drove to Toronto to take in a Blue Jays game at the Rogers Centre.

This isn’t the first time sports lover Joan, who says she has been a Blue Jays fan “forever,” has gone to a Jays game with staff members from the Lindsay long-term care home. Personal support worker (PSW) Trina Teel has organized three other trips with Joan to the Rogers Centre in the past.

“I really enjoy it,” Joan says of the outings, adding she looks forward to watching baseball games live.

Trina says she knows what a big Blue Jays fan Joan is, noting the resident also supports the Toronto Maple Leafs. Organizing such outings is one way Trina says she and other team members can enhance quality of life for people.

“We try to take Joan (to a baseball game) every year,” Trina says. “We take Joan to Toronto, we watch the game and then we come back home, and she loves going to the games.”

The ladies drove to the Rogers Centre, booking accessible parking at the stadium beforehand, so everything ran smoothly, Trina adds.

Trina says she was inspired to organize baseball-game outings for Joan when she noticed how much time the resident spent watching baseball and hockey on TV.

“I also enjoy ball games, so I offered to take her,” Trina says.