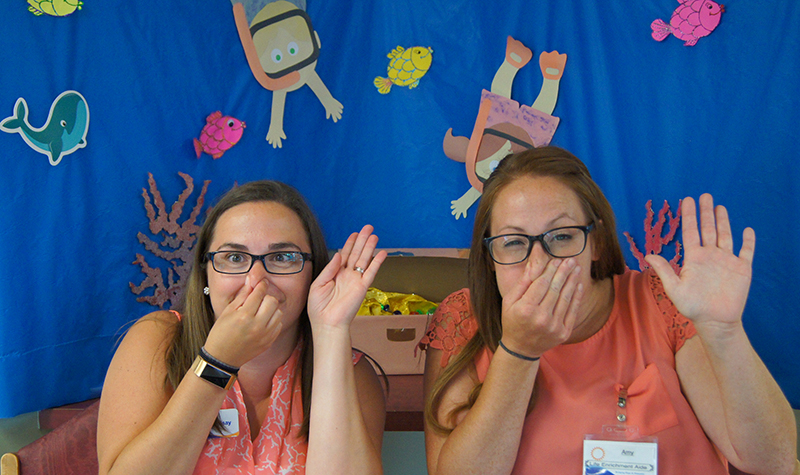 ‘They don’t just come to work; they’re thinking about work when they’re not even here,’ LEC says of her team

In the short time life enrichment aides Amy Whitehead and Kim Williams have been working in the life enrichment department at the Lindsay long-term care home, they have brought enthusiasm and creativity to their roles, resulting in top-notch programming for residents, Lyndsay says.

The LEC cites the Under the Sea theme the team created at Frost Manor in July, which saw the activity and dining room decorated with octopuses, a shark, a ship, seaweed, crabs and many fish, as an example of how she will come up with a simple idea that is then brought to life by Kim and Amy.

“They really just took this idea and ran with it,” Lyndsay says, adding what really impressed her was a shark-themed bean-bag game that developed from the Under the Sea idea.

“Amy turned a simple bean-bag toss into a game called ‘feed the shark’, which was hilarious because of all the residents who came to that game,” she says.

“We almost couldn’t put it on because we had 17 residents who wanted to play. … What Kim and Amy do so well is the way they take the ideas and put their own spin and twist on them. It creates a whole different game with a different vibe and atmosphere for the residents to look forward to.”

Kim, who was named Frost Manor’s Everyday Hero recipient this year, says incorporating a monthly theme into a new game gets a lot of approval from residents.

“It really ignites the interest of the residents when you present the games in a different way,” she says of the shark-themed bean-bag toss.

Often, Lyndsay says Kim and Amy will come to her with ideas they’ve discovered on websites like Pinterest and then brainstorm about how to create new programming.

“They don’t just come to work; they’re thinking about work when they’re not even here,” Lyndsay says. “For them, this isn’t work, it’s a real passion.”

Study shows music and dancing enhances quality of life for people with deme...