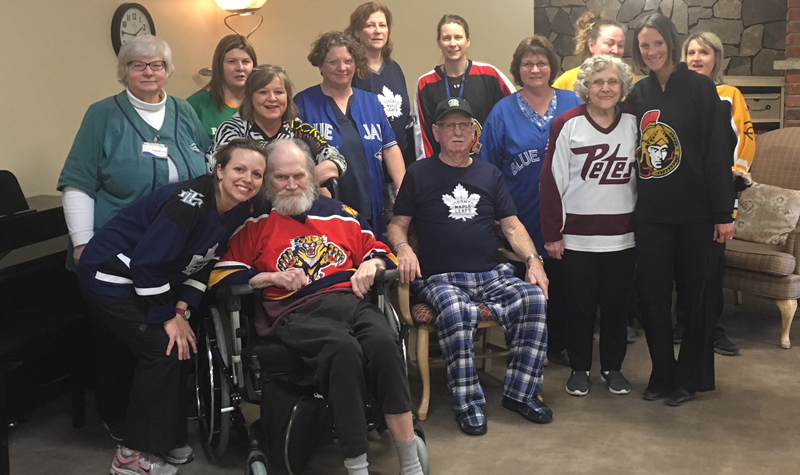 Residents and staff members at Burnbrae Gardens showed their support for the Humboldt Broncos on April 12 when they joined the #JerseysforHumboldt campaign in support of those affected by the recent bus crash that claimed the lives of members of the Saskatchewan Junior Hockey League team and employees.

What started as an idea on social media to encourage Canadians to wear hockey jerseys to work or school on April 12 quickly caught on across the country, and the folks at Burnbrae Gardens wanted to show their support for the Broncos and the town of Humboldt, Sask., notes Burnbrae Gardens administrator and life enrichment co-ordinator April Faux.

The interesting thing is that it was not something the Campbellford long-term care home’s staff planned – the idea for everyone to wear hockey jerseys that day in support of the Broncos team happened organically, April says.

April had heard about the campaign, so on the morning of April 12 she went to work with her hockey jersey in her bag. When she arrived at Burnbrae Gardens, she noticed several other staff members wearing hockey jerseys.

“The staff members all took it upon themselves to do that,” April tells The OMNIway. “When I saw everyone with their jerseys on, I thought, ‘oh, wow.’ ”

April Bishop, a nurse at Burnbrae Gardens, even brought a large bag full of hockey jerseys her mother had given her to hand out to any residents and staff members who didn’t have a jersey but wanted to wear one that day.

“I’m very thankful to April Bishop that she had those jerseys lying around, and that really helped make it a bigger event, and we were able to include the residents as well which was pretty neat,” April says.

On April 6, a bus carrying members of the Humboldt Broncos hockey club along with coaches and team staff collided with a tractor trailer in rural Saskatchewan. The team had been travelling to a game at the time of the crash.

The crash killed 16 people and injured 13 others. Since then, there has been an outpour of support for those affected by the incident from people across Canada and around the world.

Connie Coll reflects on year volunteering at Springdale with her cat, Hero
Scroll to top
https://omniway.ca/what-is-the-best-vacuum-cleaner-to-buy/