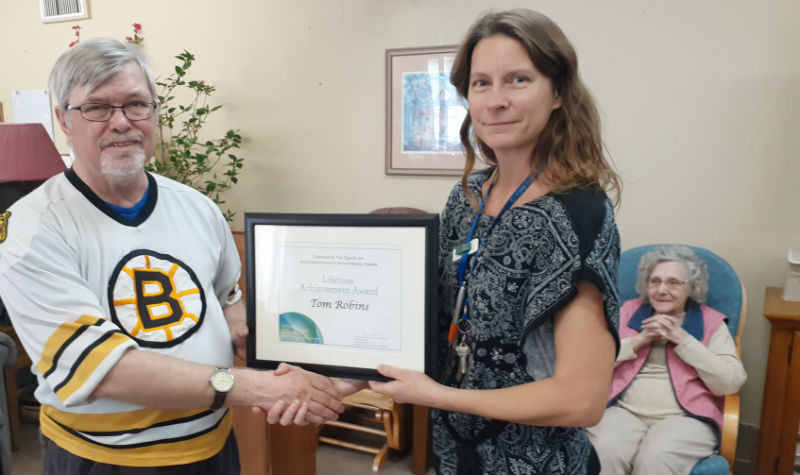 CAMPBELLFORD, Ont. – Burnbrae Gardens resident Tom Robbins has been receiving awards his entire adult life, and in October he received yet another accolade to add to his large collection.

Tom was named the Campbellford long-term care home’s 2019 recipient of the Lifetime Achievement Award, an honour which is presented to people living in each of OMNI Health Care’s 18 long-term care homes who have demonstrated commitment to other residents, their home and country.

Tom’s niche has always been volunteering, and it’s a passion he’s had for more than 30 years.

Tom grew up in the Campbellford area and moved to Peterborough in 1981. Tom says it was his mother who inspired him to start volunteering. His mother, who was also a one-time resident of Burnbrae Gardens, raised Tom along with his 12 siblings. That wasn’t always easy for her, Tom says.

“I decided to do something to help others so they wouldn’t have it so hard,” Tom said of his volunteer work.

Tom made a significant impact in the Peterborough community and has been described in newspapers as “an amazing and valuable volunteer,” explained Burnbrae Gardens RAI co-ordinator Becky Brownson.

“Like Norm from Cheers, everyone from Peterborough knows his name,” she said.

At the age of 38, while a student at Fleming College, Tom was named a recipient of the David West Memorial Award, which recognizes people for community contributions.

During his time as a student in the Alternatives program at Fleming, Tom served as class president and represented the class on the board of directors for the program as well as being secretary-treasurer for the local branch of People First, an organization advocating for people who have disabilities.

Tom also started volunteering 30 years ago with the YWCA in Peterborough, where he says he has made “so many friends.”

Other awards Tom has won include an accolade for being the top fundraiser of a YWCA Freedom Walk, an award for helping during the Peterborough flood of 2004, as well as a myriad of honours from organizations including the Canadian Cancer Society and the United Way.

Tom moved into Burnbrae Gardens in January. Not surprisingly, he almost immediately started volunteering at the home.

Tom can often be found in the hallways assisting with cleaning or helping out the staff.

Pancakes bring residents and families together at Forest Hill