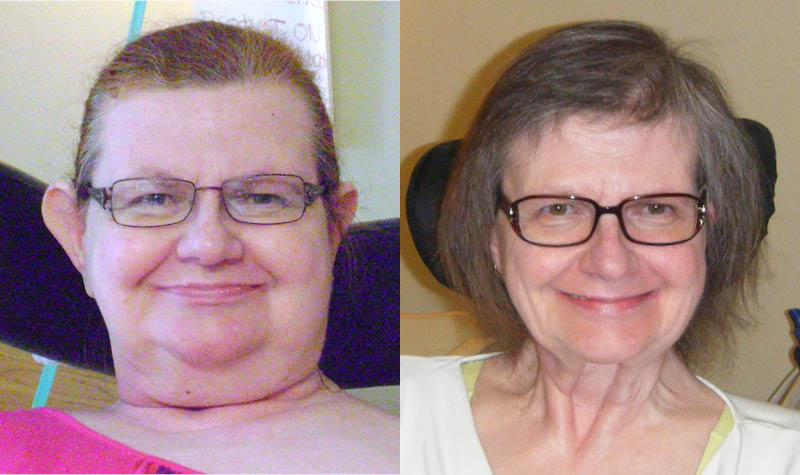 Country Terrace resident Pam Brooks before and after her 131-lb weight loss.

Country Terrace resident no longer classified diabetic, regains much of her mobility and independence

When Pam Brooks moved to Country Terrace four years ago she was at one of the lowest points she’d ever been in her life.
Her husband of 38 years, her high-school sweetheart, had passed away three years before. They had started dating when she was 13. They were married when she was 18.

“He was my rock,” Brooks says.

Hospitalized shortly after her husband’s death with weakness in her limbs, Brooks was moved to a long-term care home where she says the primary response to her health concerns was to increase her pain medication.

Not satisfied with the treatment at the other long-term care home and wanting to be closer to her daughter, Brooks chose to move to Country Terrace in Komoka.

“When I came here (to Country Terrace) I was a full lift (meaning a machine had to transfer her to and from the bed, bath and so forth), 328 pounds and diabetic,” Brooks recalls.

“I had lost my husband and I didn’t care one way or another what happened.”

And then came the question from Country Terrace’s physiotherapist, Burton Moon.

Brooks chokes up as she remembers that moment. She had already started believing what she’d been told before – that she was just going to keep on getting worse until she died.

“I had thought, ‘Well, great, then there’s no sense in me trying to fight.’ But when Burton came and told me he could help me, then I had a reason to try,” she says.

Brooks was also moved by a sliver of hope that maybe she could enjoy life with her daughter and two grandchildren again.

So began the two-year journey to this time.

“We started basically with me standing up against the machine, holding on, (working up to) being able to stand there by myself for a period of time. And as I got stronger he just increased what we did, how we did it,” she says.

One of the key issues Brooks faced was a dominance of pain in her right side, which led her to avoid motion.

Having Moon create the exercise routines for her gave her the confidence that she wouldn’t further harm herself by moving.

“I created the space where it was safe to do (these routines),” the physiotherapist says. “She has confidence in me, in that I make certain that no harm comes to her as she experiments.

“She has allowed her right side to build up and become strong and she is working very hard to see if she can recover skills with her left side,” Moon adds. “Though her left side is still a very inefficient side, it too has gained strength.”

Besides the exercises, Brooks became more thoughtful about what she eats.

“I don’t eat any red meat of any kind, no turkey, no chicken. I very rarely eat sweets. Most of the time I eat fruit if I do want something sweet. The only thing I drink is water and green tea with lemon and ginseng,” she says. She also likes to snack on a saltless trail mix that life enrichment staff pick up for her at Walmart.

So, what has all of this change made possible in Brooks’ life?

For one, she no longer requires the full lift transfer. She can walk with her walker throughout the entire building, including up and down ramps.

She is also mostly independent with her personal care. For instance, she can dress herself and take care of most of her activities of daily living.

Besides her newfound mobility and independence, Brooks has lost 131 pounds. And for about a year and a half, she has required none of the medications for her former diabetes diagnosis.

Looking ahead, Brooks is determined to keep building her strength and independence. One goal she’s considered is walking without a walker. This will require continuing to build up her strength in her left side.

Though she still misses her husband – next month it will be seven years since his passing – Brooks has clearly found reason to keep fighting and moving forward.

“I have always been a very determined person,” she says. “Once I got over my depression about my husband, that determination took over.”

Despite the snow, spring plans are blooming bright at Wildwood Care Centre