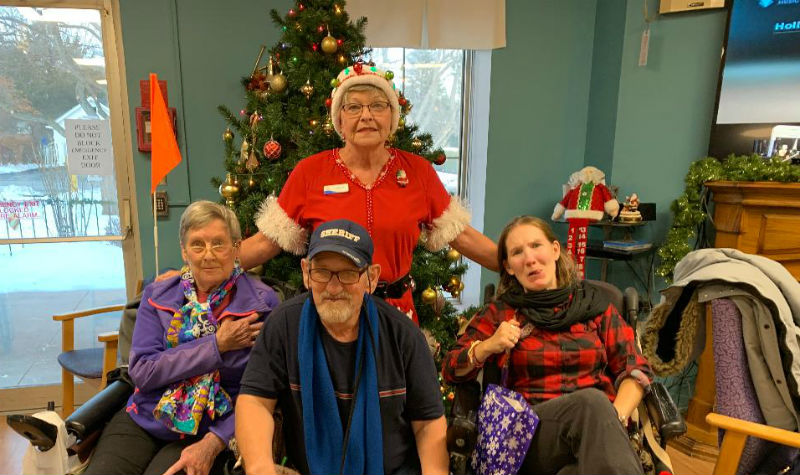 BRIGHTON, Ont. – With sweet treats, dancing, spirits and a visit from St. Nick, Maplewood officially decked the halls for the Christmas season.

For three decades now, special visitors have been spreading holiday cheer at Maplewood, marking the start of the festive season for residents and staff of the Brighton long-term care home.

Members of the Royal Canadian Legion’s Brighton branch and military personnel from Canadian Forces Base Trenton hosted their yearly Christmas party at Maplewood on Dec. 5.

The highly-anticipated event was a success for all involved.

“Their eyes lit up,” Garett says about the residents when they saw the men and women in uniform from 8 Wing Trenton.

For the Master Corporal, the occasion provided the opportunity to get involved in the community. There were eight members of a lodger unit of 8 Wing Trenton at the party.

Legion members David and Lois Wyndham have been helping with the Christmas party at Maplewood for about a dozen years.

The Legion brought Santa Claus to the affair and provided gifts for each of the home’s 49 residents. “It’s about giving back to the community.”

Lois said she always enjoys seeing the faces of the residents as “they’re just so happy to see everyone.”

Maplewood hosted the event in the home’s dining room with carols and a Christmas tree setting the scene for the festivities.

“Staff enjoy it too and pump up the excitement for the residents.”

The party occurs each year on the first Thursday in December.

‘One of the most successful’ Streamway Villa Christmas bazaars also had...
Scroll to top
https://omniway.ca/what-is-the-best-vacuum-cleaner-to-buy/